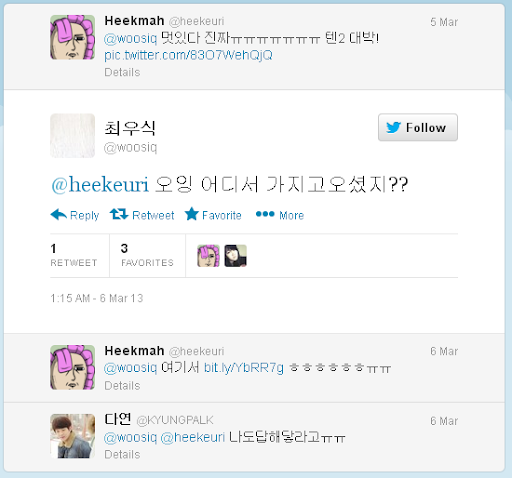 우찌기오빠~~~~~~
March was full of happiness to me as a Wooshik/Woosiq/우식 fan hahahah!

First, I got a reply from himㅠㅠㅠㅠ

Then he uploaded the picture I tweeted him to Weibo & Twitter (and maybe in Family Gallery too but everyone wasn't really sure if it is him LOL)... I know its a small thing but to me its a big thing. HAHAHAA T_T_T_T♥


Second, I sent him some snacks and a book for his birthday.. and HE TWEETED A PIC OF THE GIFTSㅜㅜㅜ I really hope he likes it LOL T_T_T♥ (except for the purple and blue thing, all was my gift ;D)

Translation: I also have international fans now!!!!!! There were so many so I took a picture of them altogether. Lets go global!! Oh yeah


I SOMETIMES TWEET HIM WITH 오예 SO I FEEL VERY SPEHSHUR T_T (throw bricks at myself)
Third, HE MADE A WEIBO ACCOUNT. AND HE WEIBO IN ENGLISH T_T So cute ♥

Fourth, I received my exam result. IT WAS 'okay'. Didn't put high hopes for it LOL…
Post a Comment
Read more
More posts